Home About Us Trustees

Led by our Chair, Mehrban Sadiq, our board of trustees has to listen to the needs of the wider emergency management family, health, education and care, and balance that with being accountable to our supporters for using their money in the best possible way.

They make sure we are true to our Vision and Mission Statement and our Corporate Values. They set our strategic direction, check our progress is in keeping with our strategy, and see that we comply with the Charity Commission guidelines. 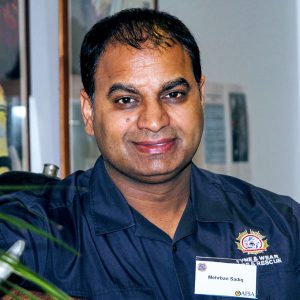 As the founder of the International Emergency Team UK (IETUK) Mehrban was a natural selection by the members to be a Trustee in addition to his role as Chair.

Mehrban is active in many areas of the community and commerce, he is particularly proud of his achievements within Dyslexia North East for which he is currently the CEO.

Mehrban brings a wealth of experience to the Trustee role having served as the National Chair for the Asian Fire Service Association (AFSA) during 2014 – 2016.

Mehrban has always felt from a young age that his calling was for the blue light services. As well as being a successful businessman in the North East of England Mehrban is as a Community Safety Manager within the Tyne and Wear Fire and Rescue Service (TWFRS).

Mehrban has extremely well developed skills in planning and organising events, delivering fire safety presentations, and working with diverse communities around the world.

Mehrbans’ Pakistani background is one of the key elements that make IETUK so successful. His familiarity with a variety of cultures, and the main challenges within the regions where IETUK operates is of great benefit.

Mehrban remains fully committed to volunteerism, making a difference in peoples lives, improving services in the community and helping to save lives. 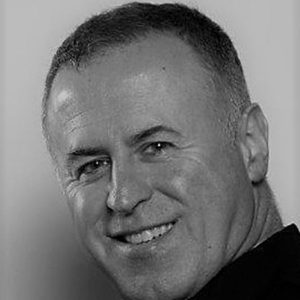 Daryl retired from full duties from Humberside Fire and Rescue Service in 2016 as Corporate Director of Operations. During a career of over thirty years Daryl operated strategically in many local, national and international roles for the Emergency Services.

He has been Head of Learning and Development, Operations, Safety and the Integrated Risk Management Team as well as a period of Assistant Chief Fire Officer.

He was selected as an exchange officer and operated as the Officer in Charge of the Central Fire and Rescue response in Cologne, Germany for two and a half months in 1998. He was appointed by the Home Office in 2000 to review and revise the operational standards for fighters and then later seconded into the Office of the Deputy Prime Minister to review standards at all levels in the U.K. Fire and Rescue Services, this also incorporated the modernisation of the services to make them fit for purpose for the 21st Century. Though for the first two years he combined this role with his operational commitment in Merseyside FRS, he returned to his full operational duties in 2005.

In June 2003 Daryl became an advisor to the National Employers for matters around standards a position held until his retirement. In 2011 he also took up two new positions one as National Lead for Equality and Inclusion for the Chief Fire Officers Association and the other as Lead Peer challenger for Local Government Equality frameworks and operational Assurance, both of these positions he held until retirement. Daryl also held the position of Vice Chair and National Advisor to the Asian Fire Services Association until his retirement.

Daryl gained a Masters degree in Public Sector Management from the University of Birmingham in 2014 publishing a dissertation on gender bias in the Police and Fire and Rescue Services. Whilst still as a Corporate Leader in the FRS, Daryl became a mentor for young adults in the Care system and a listening volunteer for Samaritans, a charity that offers emotional support to those who need it.

Daryl is now a schools Governor and Head of its Finance, Personnel and Environment Committee and also a practicing Magistrate. 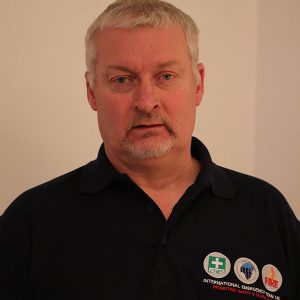 Having worked in the public sector for thirty years with Tyne and Wear Fire and Rescue Service (TWFRS) Colin decided it was time for a change and moved on to new pastures.

On retirement Colin incorporated his own business and set about using his knowledge and skills in the corporate sector, providing an emergency management consultancy service to blue chip clients such as Serco Defence and the Nuclear Decommissioning Sector.

His fulfilling career has seen Colin serve at a wide number of departments and locations, and in a variety of roles. Colin brings with him a wealth of knowledge and skills in areas such as Operational Assurance, Training and Urban Search and Rescue having been trained by experts in their relevant fields in Texas and Germany. 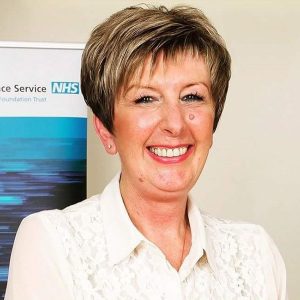 Diane is a Health Service professional currently undertaking the role of a First Responder for North East Ambulance Service (NEAS).

Dianes’ knowledge and skills are maintained at the highest level hence she is a Qualsafe Approved Instructor.

She has substantial experience in delivering training in all mandatory requirements e.g. CPR, First Aid, Medicines Management, Deprivation of Liberty Safeguards (DOLs), Palliative Care and Moving and Handling to healthcare workers in a wide variety of healthcare settings. 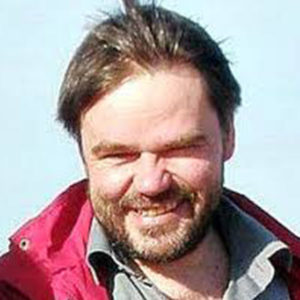 Richard is currently a Senior Lecturer in Economic & Political Geography at Northumbria University at Newcastle upon Tyne, in the Department of Geography and Environmental Sciences working with colleagues across the University more widely.

Richard has a broad background across the environmental/life sciences, human geography & international development, including disaster and development studies and emergency planning.

He teaches and supervises at all levels, from foundation degree, under-graduate degree level, taught Masters degrees (including the MSc Disaster Management and Sustainable Development, which he led until recently for several years as Programme Leader), and also (jointly) Doctoral students, often across disciplines. He has also advised & inspected further education colleges in the UK on access to higher education. He is also serving on the UK’s Geographical Association’s Post-16-Higher Education national committee. He is currently also an Elected Member of the University’s Academic Board (Staff Representative).

Richard serves as academic peer reviewer for research grant application for UK research councils as well as international scholarly peer-reviewed journals and publishers across the social and engineering sciences. He has been a Visiting Lecturer and Researcher at several Universities in Poland, Germany and Flanders / Belgium over the years.

He has been part of, and has (co-)led, interdisciplinary (including applied) teams of (electrical and computing) engineering, environmental science and also social science (user research, evaluation research, including in the field of emergency planning and fire risk reduction) funded by the European Union, industry and governmental agencies, as well as civic education seminars funded by governmental agencies and non-governmental organisations (including scholarly foundations and professional bodies).

Richard has volunteered in the past as a humanitarian consultant in Bosnia and Herzegovina in the mid-1990s, and has experience of volunteering and field work beyond Europe in, for instance, Thailand and Myanmar (Burma) and the Dominican Republic. He also has a track record in Holocaust and Genocide (including field-based) Education, and human rights campaign education and campaign co-ordination on a national volunteer level (first in German and then in the UK). 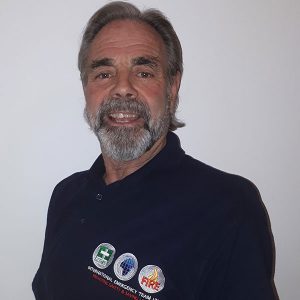 Stephen is a retired Fire and Rescue Service Watch Commander with extensive leadership and management experience in the operational emergency management arena.

Stephen commenced his career in what was at the time West Riding County Fire Service in 1968. During the longevity of his exemplary service he has commanded a multitude of significant operational and humanitarian incidents, and saw the service transition into Humberside Fire Brigade in 1974 and on into the modern day Humberside Fire and Rescue Service.

Stephen’s knowledge is extensive in respect of the operational and training aspects of the Fire and Rescue Service. This was complemented by an extended period of service where he worked away from the response element in the Fire Prevention Department of the Service.

Stephen enjoys being absorbed into the many cultures that the International Emergency Team UK (IETUK) exposes him to. He maintains his passion and commitment as a volunteer about helping people in hard to reach communities. 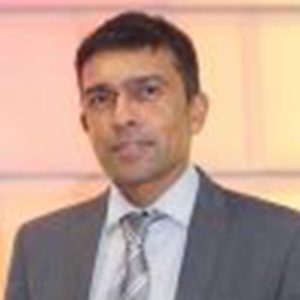 Between 2001 and 2004, he led a regional research centre on advanced virtual prototyping, involving the Universities of Salford, Manchester and Lancaster.

Terrence was the Technical Director for the EU funded CoSpaces project (12m Euro) leading the scientific work packages and collaboration between the scientific teams and the industrialists. He was also a core member of the INTUITION Network of Excellence project involving over 50 research centres across Europe to develop coordinated research activities on VR.

As a part of the EPSRC funded Vivacity project, he led the development of a collaborative urban planning environment in collaboration with the Black Country Consortium and Ordnance Survey.

Recently he has completed three EU projects (Design4Energy, PROSECO and CROSS DRIVE), which delivered advanced team collaboration platforms for the energy sector, manufacturing and space agencies.   He is now leading a large EPSRC projects to develop a “Collaborative Multi-agency Platform for Building Resilient Communities”.  This project aims to develop a digital infrastructure that can offer intelligence to a range of agencies in Sri Lanka, Pakistan and Malaysia to work together to reduce the impact of disasters such as floods and landslides on communities.

One of the iconic project that Prof. Fernando has developed that is relevant to this proposal is the creation of a 4D Simulation Environment for Track Renewal Programmes for Network Rail and its partners, which won both the regional and national “BIM Project of the Year Award” from the Construction Excellence in 2016.

He is passionate about bringing interdisciplinary teams to bring innovation into cities and commercial organisations. To this end, he organised and chaired three major national conferences on Smart Cities, Smart Homes, IoT & Big Data in collaboration with the Salford Professional Development (SPD) team at the University of Salford, Manchester, UK. 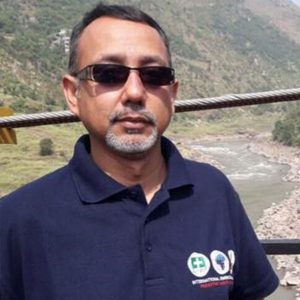 Mohammed is a serving Middle Manager with the West Yorkshire Fire and Rescue Service; he undertakes the role of District Manager.

Prior to the Fire Service Mohammed was employed by the Ambulance Service.

Mohammed is a Graduate in Biomedical Science and has also obtained a Post Graduate Certificate in Education.

He has a number of other qualifications including a NEBOSH in Occupational Health and Safety and Fire Safety and Risk Management.

In addition to his work with IETUK he has been actively working in the community on a voluntary basis. He has been using his extensive knowledge and experience to support the emergency service in the Punjab over the last few years.

Mohammed is also a qualified Driving Instructor. In his spare time Mohammed like to play football and has a keen interest in Technology. 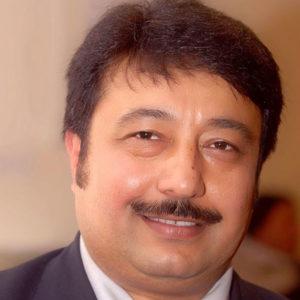 Councillor Gohar Almass MEE is a community leader, activist and philanthropist based in Leeds who originates from Pakistan – nowadays Khyber Paktunkhwa (KPK state).

By profession and qualifications an Electrical Engineer, holding key positions at national and multinational organisations, he has chaired and volunteered in several community and voluntary organisations over the years.

He was elected as a councillor for Leeds City Council in 2018 and later became Chair of the West Yorkshire Fire Rescue Authority (WYFRA) Community Safety Committee.

Before that he also became the first Muslim Deputy Chair of the Independent Advisory Group (IAG) for West Yorkshire Police Leeds District, 2015-2020. He is currently Secretary General of the South Leeds Community Alliance.